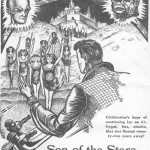 Image of illustrations for ‘Son of the Stars’ story

Notes and comments for Binder’s ‘Son of the Stars’