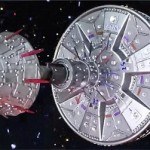 Observations on the short story

Some stories begin at the outset of or after the end of a generation-starship voyage. Arthur C Clarke‘s early story “Rescue Party” (May 1946 Astounding) has Earth evacuated in the face of a coming nova, the evacuees heading confidently towards the stars in a giant fleet of primitive generation rocketships. Brian M Stableford‘s Promised Land (1974) tells of a society of colonists whose social structure is based on that developed over generations in the starship on which they arrived.(Encyclopedia of SF)

The May 1946 issue of Astounding published “Rescue Party,” an energetic romp through a doomed solar system written by Arthur C. Clarke, who five years later would contribute to raising public awareness of space flight through the publication of The Exploration of Space, a non-fiction work in a significantly different spirit from its near namesake The Conquest of Space. In “Rescue Party,” after picking up signs of tidal stresses in the Sun, a multi-racial, highly technological alien civilization enters the solar system and approaches the third planet, now wracked by worldwide volcanic eruptions. Our star is about to go nova, so the crew of the survey vessel above the Earth use the little time they have left to explore the burning cities of mankind, now deserted, in order to find survivors they can relocate to another planet. At great risk to themselves, the rescue party remains on Earth for as long as they can, but eventually they have to leave the system empty handed. Their disappointment turns to wonder when their screens light up with multiple contact icons: “That is the greatest fleet of which there has ever been a record. Each of those points of light represents a ship larger than our own…. Yes, they dared to use rockets to bridge interstellar space! You realize what that means. It would take them centuries to reach the nearest star. The whole race must have embarked on this journey in the hope that its descendants would complete it, generations later” [54]. The tale ends with the survey ship speeding to meet the human fleet, initiate first contact, and spoil all the fun of generational space travel by giving humans warp drive technology. Clarke’s narrative does not afford us a glimpse inside the generation starships themselves, and the promised speedy development of FTL capabilities on the part of the humans would have made the point moot in any case. From our point of view, perhaps the most relevant feature of this brief story is the momentary glimpse we receive of the two stages of space exploration in Wollheim’s consensus history of the future together in the same passage, as the warp drive-equipped alien survey vessel approaches the human fleet slogging its centuries long way to deep space in search of a home.