Notes on Ballard’s ‘Thirteen to Centaurus’ 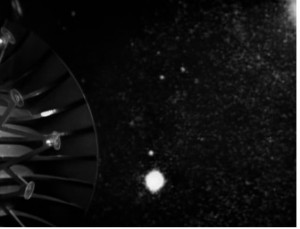 Establishing shot of craft in space

Easy observations on the short story 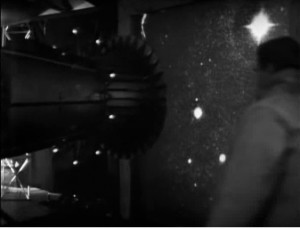 The model of the craft from outside

Caroti, in The Generation Starship in Science Fiction (2011) sees ‘Thirteen to Centaurus’ as a place of psychological entrapment. The children of those who volunteered for the mission “are trapped on a stage without a curtain, a Kafkaesque farce for monsters at the expense of the helpless, and there are no excuses for this piece of theatre: if we were to justify the experiment in the name of the real mission’s success, we would end up on the bottom side of the slippery slope leading to the same argument the Nazi doctors devised for their experiments on human subjects”.

Caroti notes the “steady loss of motivation both inside the spacecraft mockup and amongst those who service the experiment. Even though the experiment is set up with many diversions of lies within lies, Alex has seen though these to some extent and he is seen by Caroti as growing unmanageable (2011). In the world outside the mockup there are now questions about the morality of the experiment and definite funding cuts to the project are forthcoming. However, the damage to the minds of those within the experiment is considered a problem by the new general appointed to run the project, so the psychologist, Francis, tries to keep the experiment running and the military personnel involved are generally supportive, making the lives and wellbeing of those in the experiment a priority. This is unusual for SF generally and certainly in the subgenre of the GS.

The observer and participant psychologist, Francis, is committeed to the experiment that the maze of lies he propagates starts to convince even himself. With Abel’s coercion, Fancis becomes the fourteenth member of the experiment on a further fifty year voyage to the Centauri system, even though Francis knows it is all a lie. Caroti notes, “Now he truly is the fourteenth member of the crew, both in his eyes and in theirs, and he will use his knowledge of the true state of affairs to ease the others into the gradual end of their lives. As soon as the doctor fully shares their existence, however, he starts falling prey to the same malady of listlessness and apathy that has gripped them, and the daily shipboard routine becomes maddening in his eyes.” (2011)

Francis notices that Abel, who is acting increasingly like the one in charge, is now paying regular visits to a seemingly unremarkable corner of the ship’s hull, and decides to investigate the spot, fining that Abel found a hole where he could see out into the maintenance area, watching those who tended the mockup in the same way they watched the experimental subjects in the mockup. Caroti adds that, “Old Peters, the captain and the only other member of the crew who does not suffer shipboard listlessness, has known for a long time that the mission is a sham. He has nevertheless decided to go along with the pretense, ‘perhaps realizing that the truth would destroy the others, or preferring to be captain of an artificial ship rather than a selfexposed curiosity in the world outside.'” (2011).

The short story ends with the shocked knowledge that, “Abel knew.” (Ballard, 1962, p115). Caroti notes that the story conclusion reveals “the true extent of the game of inside and outside being played at the location of the fake starship” (2011). In this scenario “human adventure into space is a disaster” and the crew believing they are on their way to Centuari lapse into apathy. Caroti links this to Ballard’s own manifesto on the ‘New Wave’ in SF, “the document in which he had invited readers and writers of science fiction to turn their backs on outer space and focus their attention on inner space” (Caroti, 2011) and this inner space is seen with Abel’s willingness to build himself “an ant farm, knowing he can play with it on the condition that he does not leave the ship, and the condition suits him fine”. Caroti believes that Abel is the “one true master of psychological manipulation in the story, detached and calculating where Francis, the actual psychologist, makes the mistake of identifying with his patients to the point of becoming one of them” (Caroti, 2011).

For Caroti the short story highlights the “fuzziness of the distinction between outer and inner space, because the multiplicity of mind games in operation at the same time throughout the story creates a landscape of cages, each one either overlapping or fully containing the others, and of all the characters it is Abel who oversees their opening and closing” (2011). Abel’s ancestors for the first fifty years of the mock trip have condemned Abel to a life in a goldfish bowl / prison but Abel is also watching those outside, watching the watchers without their knowledge. Caroti concludes his discussion of the story with the summary that,

Abel is the most powerful individual in the story, after usurping Francis’s role as mission psychologist and making him an inmate. The Doctor has crucially misunderstood the nature of life in the rat’s maze he and his fellows have created for the crew, and when he becomes one of them he is unprepared for the role Abel has devised for him as is everyone else in the world. (Caroti, 2011)

Relevance to the focus questions 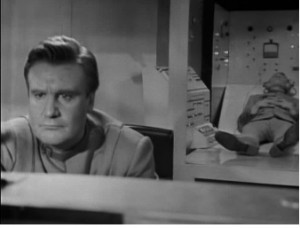 The focus questions for the GS Project texts presented are –

‘Thirteen for Centaurus’ both in Ballard’s short story of 1962 and the later video dramatization for Out of the Unknown  (Potter, 1965) from which the still images on this page are drawn, approach the focus questions from a very different angle. This is because the voyage of the crew to Centauri and a supposedly habitable planet in that system is faked.

Nevertheless, the military and the scientists themselves who run this fake experiment with a vast, mockup of a space craft in which the crew live for their one hundred year voyage (with the exclusion of the doctor, Francis) make it very clear what they want maintained.

Through Francis, the scientific and military authorities want the crew to maintain their mission priorities. They want the crew to continue to function normally exercising and fulfilling their various repetitive roles required for the ‘journey’. To ensure this they use an overlapping, elaborate system of lies, backed up with a sort of brainwashing that requires the crew member to undergo long and exhaustive training on a special machine that drills into them their mission priorities.

Ballard then argues that the military industrial powers behind this mockup GS craft are experimenting to find the best possible set of processes and procedures to maintain the ship’s mission, even at the cost of the crew’s personalities, their vitality and their beliefs. What does Ballard then say about such an experiment? Is the ends worth the means of brainwashing and life-long, generational lies? Finally, is this what we all experience in our own lives? Are we subjects of an elaborate experiment to maintain the status quo for the elites of the world?

Abel is a young man of exceptional insight. He uncovers or is included in the conspiracy at a first level when he works out the crew can not possibly be on a space station. He then uncovers the secret of the crews stability and passive acceptance, the brainwashing with the neural-linked indoctrination machine run by Francis, and he masters this himself. Finally, he uncovers the final secret that there is only a mockup and no actual journey and then he starts his own experiment on the scientific and military watching the mockup.

What does the author tell us about Abel’s decision to both stay on the mockup for his entire life and to enslave Francis with the brainwashing? Does Abel discard the need for power over experimental subjects, or does he embrace this power and start his own experiment in control?

If the mockup of the GS craft with its crew acts as an analogy for Earth and society, is this use of power, force and psychological manipulation sustainable for the one hundred year voyage? What does this tell us about the need for young people to break the shackles of control in their own society? Do these young people who discover the truth become just as manipulative and cruel as the old masters? 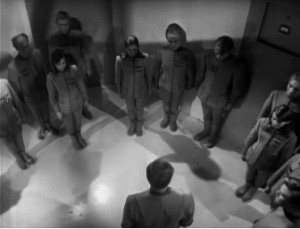 The crew onboard drilled into their roles