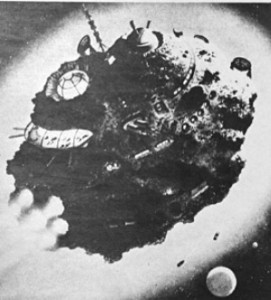 Image by Schonberg, A. from ‘Interstellar Flight’, Science Fiction Plus, April 1953

Notes on Manning’s ‘The Living Galaxy’

Simon Caroti argued that ‘The Living Galaxy’ (Manning, 1934) was the first “fully-fledged generation starship narrative” (2011) hailed by the story’s publisher, Hugo Gernsback, as an extraordinary feat of imagination. Collected into a later anthology, ‘The Living Galaxy’ (Manning, 1934) uses incredible spans of time as well as distance to “increase our sense of wonder” as well as to lay out information, in this case as a lecture. This was a well-known means of bringing the reader up to speed with the new, fictional universe, though it is rather clumsy.

The voice of the author of the story who invites the reader to enter the life of a six year old boy in a future 500,000,000 years in the future, morphs into the history teacher Zeta Nine with ageless, dark and glittering eyes to wave “the thread of a world of wonders” (Caroti, 2011).

Caroti notes that the reader is now immersed in the “generational pattern here, the stumbling block that constitutes the basic premise for every generation starship story: our best speeds are not sufficient to take us to another star within a human-functional framework.” (2011) The solution in this story is “an antiaging procedure”, allowing us to “undertake multi-million-year trips without trouble”.

Another great advantage of the infinitely protracted lifespan “is that the crew of a starship will never have to face the task of transmitting knowledge, purpose, and cultural values from one generation to the next until the end of the trip, thereby defeating the key problem inherent in generational space travel and freeing the author from the necessity of dealing with it” (Caroti, 2011)

As was noted above, the Manning story was published by Hugo Gernsback and many of the fictions in his magazines and collected novles showed an unshakeable belief in the role of science and scientific enquiry to solve human problems. As a result, Caroti notes, Because the people onboard Bzonn’s generation starship are children of the Gernsback age to the last man and woman, the problems that might conceivably face less driven immortals on a four-million-year voyage to the end of the universe – loneliness and the strangeness of outer space preying on the mind; alienation and psychoses; political rivalries; romantic jealousies; depression and loss of purpose; despair; aimlessness – do not exist for them.” (2011)

Manning’s choice to shape his story as a chapter from a history book helps. First of all, presenting information about the future as if it were long-established fact gives the narrative a more authoritative voice and prevents most of the awkwardness usually associated with a forward thrusting approach to prediction.

Manning’s story ‘The Living Galaxy’ (1934) made the concept of a generational ship a fundamental participant in the world of the narrative. Caroti (2011) notes that,

Without generational space flight there would have been no story. But even so, the planet-ship itself had not yet had a story of its own. Every narrative and form of advocacy presented about it had given it no more than the role of co-participant in a larger endeavor, without addressing the specific issues inherent in its makeup; Manning’s narrative had merely hinted at the various elements that would influence the lives of its inhabitants, and then only from a multimillion-year historical distance as one of the many threads in a tale traveling in a different direction.

While the passages of time, the millions of years of travel, seeding new colonies and creating new and improved Humanity craft, is part of the sense of wonder given by the story, the spaceships themselves and the living conditions of their human controllers are given very little attention. It seems that the only thing you need to know about a growing society of research scientists within a craft for millions of years is that their endless curiosity made it all possible. Together with the ability to transmute energy into matter (like the Star Trek: Next Generation replicator) and endless, clean atomic energy, humanity’s destiny is bright and positive, free of religious belief, despair, war or power-struggles. This story then is a starting point for GS narratives where the focus is very different – on less perfected humans in their craft travelling through the vast blackness, as is hinted at just a little in Binder’s (1940) ‘Son of the Stars’.