Costs and Constraints of the Aniara Models

The series of models used were constrained by the very serious limitations of the model builder, as well as financial constraints and the requirement to use recycled materials.

In Canberra there are currently two Green Sheds, a system for taking materials out of landfill and recycling or repurposing those bits and pieces. The best end up at the Green Shed shop in the middle of Civic, the heart of old Canberra.

All the pieces for the models on this page came from the two Green Sheds and this writer is currently looking out for a large, rotating drum-like section to build an interior habitat for the GS Aniara, named for the famous and wonderful Martinson poem cycle.

Image of the painted hose reel.

Because I needed a habitat that revolved to provide force enough to simulate Earth gravity for the GS Aniara, I bought two broken hose reels. One was cannibalised for the other.

While out at the Green Sheds over a few visits a nice, old square projector screen for slides was bought, hose fittings and lengths of plastic tube, a lampshade, an old hair dryer and curtain rod ends with other bric-a-brac, though none of it was exactly what I needed, so there was a sense of a continuing quest about the visits and the build. All of these and more to boot was bought for under $10, especially when I pointed out that it was a for a school project as the Green Sheds people were very supportive.

As the model should be complete by Year 9 students and their teachers (if they wish) in their spare time, only the cheapest materials were used to put it all together. This was bought from the hobbies aisle at Masters, a now defunct cheap hardware barn that was run by a supermarket chain. 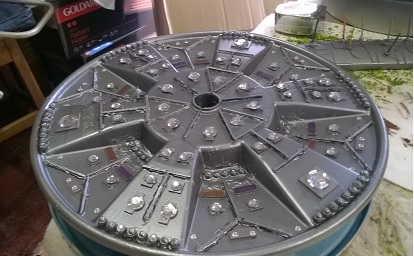 Image of silver hose reel end with beads and matchsticks

From Jaycar came both coloured LED lights and a strip of plain white LEDs. A small and cheap power adapter was bought plus a beginners soldering kit, again, for later use than just the GS Aniara models.

From eBay came Chinese miniature vegetation and tiny trees and these vast packets of 1kg mottled grass and shrubbery fibre were under $2 each. Also from eBay came the largest, cheapest poster of deep space taken from the Hubble telescope. As the purpose was to build an actual model rather than in software, the poster was needed to prop the models against for that wonderful look of a craft in space, or really a very amateur model proudly cruising through Deep Space, with the fishing line holding it up airbrushed out. 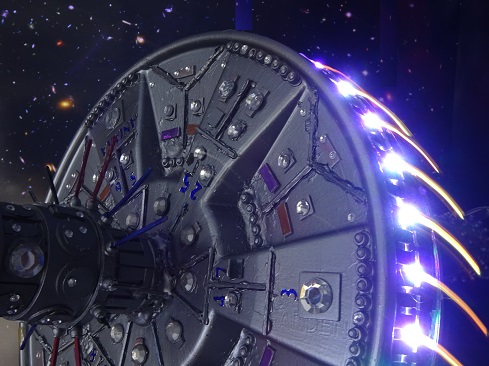 The creation of the habitat section, the revolving discs with LED lights is seen in the images above, with a final effect from a rather shonky photo using a better camera than on my Nokia Windows Phone. This part of the model was meant to rotate on a hose piece between two hose fittings but the crafting was so poor I had to glue it all together and using masking tape to stick in the LEDs. Still, when the model is turned seventy times a little bit at a time it was hoped to look like it was turning. For the animation I used the very familiar Windows Movie Maker with the time per frame turned down to the lowest setting of .125s each. However, this was jerky for the 68 images so I put it into the Zoetrope Windows 10 app and had a smoother film from 10 frames per second, as seen in the Gallery page.

Because of the several early SF series and films using models, like Dr Who’s ‘The Ark in Space’ (Bennett, 1975), the Starlost model of Earthship Ark (probably one of the best of its type) from ‘Voyage of Discovery’ (Hart, 1973) and ‘Mission of the Darians’ (Austin, 1975) and certainly the use of the last of these three in class as an excellent example to compare with Heinlein’s Orphans of the Sky (1963) and Harrison’s Captive Universe (1969), there was much to inspire with a balsa and plastic painted model on a backdrop of stars. As seen with the television series, the idea was to start a shot with the ship in deep space, then zoom in to a detail and then further in to a habitat, often revolving then cut to an interior of the ship.

For this I needed a small segment that revolved in exactly the way the habitat ring did not. The second hose reel with its attached handle to turn was used, with some extra panels scavenged from broken bits and pieces. The hose reel was spray painted a pewter colour to be less reflective with a hobby acrylic paint. Crenulations were needed as spaceships have had a multiple or regular or irregular panels and antennae and such like from the very first models to current iterations.

The painted and stuccoed segments of the hose reel had white LED lights stuck between them on a lead out to a power supply, turned by cranking the hose-reel handle. In early experiments the white LEDS were far too bright for the close-up photography so in the end blue and green paint was daubed onto each diode as if they were different sections of the revolving habitat. The green and blue light was meant to show the need to grow vegetation for oxygen and as habitats for people, that might have been overgrown as in the memorable ‘Darians’ episode (Austin, 1975) and Aldiss Non-Stop (1958). 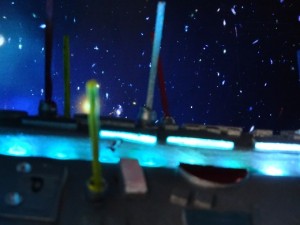 Close up of ring detail against space poster

The final results were still disappointing as I hoped for a more spectacular effect. A brief example is seen in the Galleries page.

The Thruster and Habitat 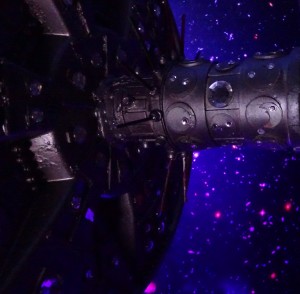 Detail of the engineering module and connection to the habitat module

The thruster was the power plant for GS Aniara, made of a cut-off coffee thermos cup, a hose connector, a small length of pipe and two balsa rods cut to size and glued.

The power plant had to be a long distance from the ring habitat because of the use of tiny anti-matter pellets to be exploded in sequence behind the craft to give acceleration. This accords with the Orion-based GS model designs but instead of small (sic) nuclear explosions against a pusher plate, such as seen in Ascension (Almas, 2014), anti-matter is used, in accordance with ideas as seen in the section on the science behind the model, below.

The thruster shaft became crooked against the habitat section in the model but with selective photography and more of the glue stick, a temporary result was achieved.

Engineering and Shuttle Close Up Revolving

Image of engineering section just aft of the habitat section

The detail of the engineering section was designed to revolve, like the habitat, at a slower rate than the larger habitat, again using centripetal force to simulate gravity. This is varied by Vernier thrusters, just as it is in the habitat ring.

In this case the cone shaped close-up section of the engineering section was made from an old hair-drying unit. As it still works, its sound will also be used for effects for the GS Project. The hair dryer was made rough with sandpaper then painted and spray painted silver and then pewter, with the usual crenulations on the surface to make it look both busy and useful. Finally, a little, hand-held Dymo LetraTag label maker (from Officeworks for $25 or so) was used to put numbers and names on the exteriors of the crenulations so that running repairs could be accomplished by those outside GS Aniara.

Communications antennae were added with different colours for different purposes as well as some observation ports for observing the revolving and possibly sick-making wheeling of the stars – perhaps to be used only when the ion Vernier thrusters were used to stop centripetal force for the engineers and to launch the shuttle from the shuttle bay.

The detail was photographed hanging on a chain in front of the space poster to allow it to be wound up and then released to spin and have a sense of the details turning. A Stop Frame of this effect was made and is available in the Gallery page, for those who can do better, who should be most teams of intrepid Year 9 students. This writer was never sure why the name of the craft would be put on the outside. After all, wouldn’t the passengers know what they were on? Well, no. In some texts, like Harrison’s Captive Universe (1969) and Aldiss Non-Stop (1958), many of those onboard did not what they were in, nor the name, so it might come in handy.

Early state of lampshade painted with crenulations and matches

The danger posed by even tiny particles when a craft approaches relativistic speed is explored in several texts but ignored in even more. They are certainly seen in Robinson’s Aurora (2015) and Stephenson’s SevenEves (2015), with the latter seen at some gorey detail as several protagonists are killed by collision with fragments of the Moon residue.

While communications with a GS is discussed in excellent depth in the main text used for the GS Aniara (see the Science section, below), only Baxter’s craft in Ark (2009) has a force field around it that seems to bat-away objects encountered in space, while others have defensive shields and even guns to destroy objects approaching the craft. For GS Aniara the main nose cone of the craft has the navigation controls, major communications functions that will be particularly important when the craft is decelerating and is then pointing back to towards Earth or its launch site near the Moon. As ion engines are now used for space flight, an ion powered defensive field is generated from the nose-cone that is angled out to shield the bulk of the side habitat ring. When decelerating, the explosive force from the thruster should clear minor obstacles. 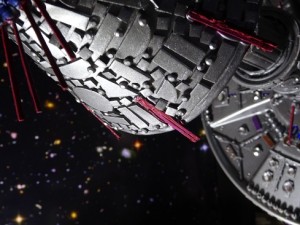 Details of the habitat ring and comms cone

The nose cone was a small lampshade and the curved protuberance from it was a plastic curtain end. The painted objects were crenulated and antennae added with the ion shield muzzles also added. The result was rather strange and hard to defend, especially for the ion shield against micro-meteorites, but it certainly can be silhouetted against the habitat and distant thruster to look as if there is considerable length of the craft.

Science of the Aniara Model

The GS Aniara model is defended on two bases: 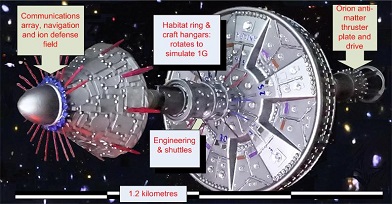 Image of ship with captions and scale

The detail of the GS Aniara is defended with evidence quoted from Gilster’s text and site, plus the wide range of research available from the Tau Zero Foundation and others. A series of images in a PowerPoint series is used for the craft as well as the videos of the craft in its rather clunky action.