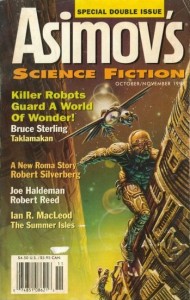 A bone-dry frozen wind tore at the earth outside, its lethal howling cut to a muffled moan. Katrinko and Spider Pete were camped deep in a crevice in the rock, wrapped in furry darkness. Pete could hear Katrinko breathing, with a light rattle of chattering teeth. The neuter’s yeasty armpits smelled like nutmeg.